And So it began

"ONCE UPON A TIME"....there came along this little lump...insignificant really when you compare it to the entire world of lumps. That is, right up to the point that it wasn't...insignificant I mean............... and so began my journey.
A NEWER SHADE OF PINK...now I more then SURVIVE...I am learning to THRIVE...
OF COURSE... we all know things are bound to get a little crazy with a surprise around most every corner...not to mention an assortment of bumps and bruises along the way...but I am ever thankful for them all...they have all made me who I am. So buckle up, hold on tight and enjoy the ride thru what I lovingly refer to as LIFE 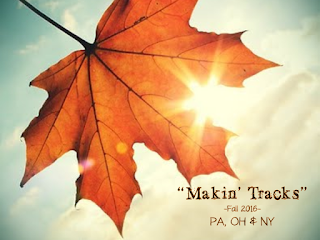 I know what you are all thinking.....what could these 2 things possibly have in common....the simple answer....ME!!!  Just in case you were unaware...how I am not sure...cause there is no way I have NOT shared my obsession with Krispy Kreme Donuts with you long before now!!!  Let's just get it out there....I was hooked my very first bite decades ago & I am truly sorry Dunkin & Timmy Ho (Tim Horton's for you south of the border) but you just don't cut it...there just is NO comparison.  So suffice it to say every time I cross the border into the USA I am on the hunt for a location close by... to buy my token 1 (or maybe 3) donut...let's just leave at saying..."mission accomplished" & now I am free,..with a very happy heart (YUM YUM) to move along, focused on the real purpose of this (or any siad) trip. After all.. R&R for me &VoR will take any opportunity to reconnect away from all the distractions of job and life....duh!!

This trip's focus was to explore some of the significant sites in our LDS church history in PA & OH... from way back in the beginning in the early 1830's.  Some of you may know a smiege of our church history & the plight of our pioneers (some of which are direct line ancestors to both VoR & me) & that it is a huge deal to our members.  The church has worked tirelessly to acquire, restore or rebuild these special places & in some cases had highways moved to protect these historic sites.  There are many major & minor spots that are now available to visit so that you can get a sense of what they went thru, feel the spirit and strengthen your own testimony but they are just as important to the NON-LDS person as these are an integral part of American History, the migration that opened up the west and the struggle to gain the religious freedom that we all enjoy today. We have had the opportunity to visit a few of these places together in VT, NY, PA with more adventures in the further from farther home.....some major planning still required...TBA

This Thanksgiving...in the Great White North...(that would be October for you more southern folks)..we took some extra days and hit the road again heading for destinations both new and familiar. Our 1st stop was Oakland Township, PA on the Susquehanna River at the Priesthood Restoration Site. It was a beautifully restored site with the homes of both Emma & Joseph Smith and Emma's parents The Hales.  These were remarkably important locations since it was in these homes that the majority of the Book of Mormon was translated.  It is also where the Priesthood was restored along with where Joseph & Oliver were baptized.  A very special spirit was there, standing in the room where those vital books of scripture were meticulously translated by a humble, obedient man & the power of God.

We spent the night at a really cool resort that was built as a private residence in the 1900 but was later turned into a golf resort. It had a certain old world vibe about it since they have tried to retain the old charm. You could just imagine seeing such notable guests as Dwight D. Eisenhower and Bing Crosby, to name a couple of their former guests, meandering around the grounds waiting for their turn to swing a club at one of those little white balls

The next 4 stops were kinda all together as we based the next few days out of one hotel centrally located on the outskirts of Cleveland, Ohio. (yes..."Etta May Travel" is up and running...working hard to plan a convenient, well organized trip specifically tailored for your relaxation and stress-free travel....DUH!!!).  The first actual stop was a definite departure from the rest...but a highlight all of its own. Situated on the waterfront (Lake Erie) in downtown Cleveland, Ohio....is none other then The Rock & Roll Hall of Fame! Now to be totally honest...cause I am....I only went along cause I knew this was  HUGE on VoR's bucket list. I had done my research and thought it was kinda pricey but it was sooooo important to him and I knew if the roles were reversed....he would be all over it for me.  I STAND CORRECTED...IT WAS WORTH EVERY PENNY!!!!  It was sooooo cool with soooo many amazing items & stories.  There was "behind the scenes"  memorabilia, quotes & photos of almost all the influential bands and individuals in music history.  I say "almost"... cause I did NOT find one thing about Glenn Miller (Moonlight Serenade...sigh!!!), The Osmonds, Luther Vandross, Barry Manilow, or England Dan & John Ford Coley just to name a few.  Let's be honest... you have to admit they were all very successful recording artists and made important contributes to the history of the music industry....but to me... they were a just a few of those especially GINORMOUSLY HUGE influences on my musical history...this is an obvious oversight on the part of those fine folks at the Hall of Fame....SHEESH!!!  We spent almost 3 hours & covered about 70% of what was there but we really only scratched the surface....if you read, watched & listened to everything available there you could spend WAY more hours.  They covered the history of music back to its roots, thru all its trends (yes,,,,even Disco which VoR still argues isn't really music), popular genres to political impacts & then some.

If you love music...any style (okay...maybe not classical, which I argue isn't real music...wink, wink)...this is for sure a "YOU GOTTA GO HERE"!!! destination for your books

I more then just Survived...

I had Breast Cancer, but it did not get me. I did not relinquish control of my Life, my Future or my Faith to this. I refused to lose the giggle just under my surface or the twinkle in my eye & so you see, to me it really was "Just a little hint of Pink"!

Show Your Support-Grab A Badge!

With His light to ever guide me, I stand Brave and Strong with my Savior

The "Voice of Reason" (VoR)..."Empress of Awesomeness", the "Pragmatically Speaking" & "Random Wisdom"

& This is My Tree

Grab a spot of shade, and let me know you were here. ettamay.mail@gmail.com

For the most part these images are from random google searches. They have all touched me in some way and to them I have added some thoughts. Thank you to those artistically eyed folk who also in saw the beauty in these fleeting moments.